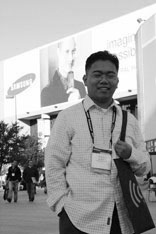 Today marks the end of CES 2006, which was held this year in Las Vegas. The show spanned the Sands Expo and all the halls at the Las Vegas Convention Center. Over half a million companies were represented, including all the major players in the consumer electronics industry. Other major companies that do not have any consumer electronic offerings were also present.

Notable developments include TV over IP technologies and enhanced television display picture quality. Honda demonstrated their humanoid robot, Asimo. Rumors of a new logo and slogan for Intel are confirmed. Intel’s new slogan is “Leap Ahead,” and their new logo looks a bit anemic when compared to their earlier one. The Microsoft booth at the center hall was fairly expansive and featured their different product lines.

CES 2006 was a great opportunity to interact with several product vendors. It was like walking into a super Best Buy store and being able to talk with company representatives personally about their products.

This entry was posted on Sunday, January 8th, 2006 at 11:30 pm and is filed under Personal Development. You can follow any responses to this entry through the RSS 2.0 feed. You can skip to the end and leave a response. Pinging is currently not allowed.