is improved with using declarations to the following:

I recently received my Dell XPS 13 7390 with pre-installed Ubuntu 18.04. My top concern is securing data such as private SSH keys and passwords saved by Internet browsers from the real possibility of losing my laptop to absent-mindedness or theft. My purist side insists on configuring full disk encryption by performing a fresh install from a publicly available Ubuntu download. My pragmatic side pushed me toward adopting the above procedure. Without the needed transparency from Dell on their additions to Ubuntu, it is difficult to determine whether a publicly available Ubuntu download will fully support the features of my new Dell XPS 7390. The above procedure encrypts any data writable by unprivileged users while remaining unprivileged. It introduces a basic layer of security while allowing enjoyment of a system configured by Dell.

Reference: How to create an encrypted file container with dm-crypt
Encrypting /home on Dell XPS 13 7390
1 Comment » 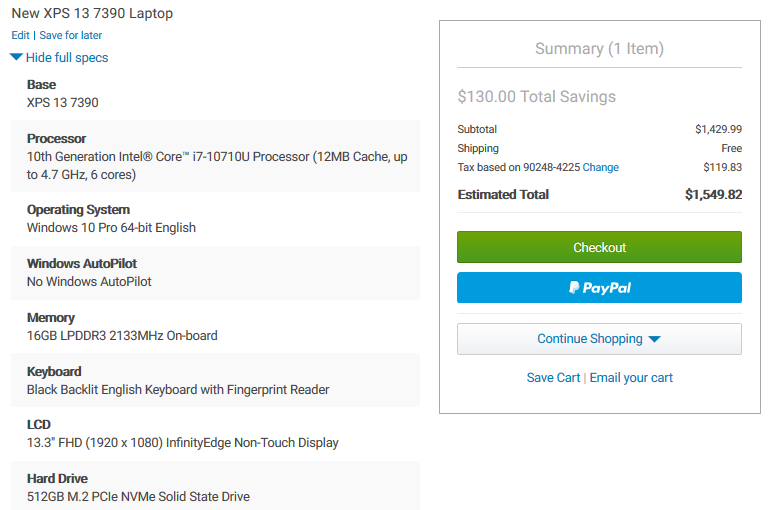 As the holiday season nears, a new laptop for developing skills and personal projects is worth considering. The Dell XPS 13 7390, with an Intel® Core™ i7-10710U processor, is really enticing. Windows 10 Pro, an M.2 PCIe NVMe SDD, and non-touch display are motivating as well. As with other big purchases, a decision will require more than a month’s consideration.

System.InvalidOperationException: Cross-thread operation not valid. Control "textBox1" accessed from a thread other than the thread it was created on.

The above exception was encountered while placing a function call with long execution time on a separate thread and having that thread update a TextBox with status updates. The issue arises, because “access to Windows Forms controls isn’t inherently thread-safe.”1

A DoWork event handler is where long duration functions are called away from the main thread. It runs in a thread separate from the thread that created the BackgroundWorker instance. Modifying a control’s properties from a DoWork event handler will throw System.InvalidOperationException().

The main thread usually creates user interface controls. It also maintains UI responsiveness typically by creating worker threads for lengthy functions. Because BackgroundWorker is likely created from the thread that creates user interface controls, and ProgressChanged and RunWorkerCompleted event handlers execute in the thread that creates BackgroundWorker, it is safe to modify UI controls from ProgressChanged and RunWorkerCompleted event handlers.

Using BackgroundWorker or the Invoke() method can be applied for different situations. The Invoke() method may be used by a worker thread to show a Modal dialog or MessageBox that prevents the main application form from receiving input while the dialog or MessageBox are displayed. BackgroundWorker allows lengthy methods to run in worker threads while providing feedback to the main thread. Both methods are acceptable mechanisms for cross-thread manipulation of Windows Forms.

Getting an A+ on SSL Labs Report

October 31st, 2019
Posted in IT Administration | No Comments

blog.stevedoria.net received an A+ overall rating from Qualys SSL Labs.
Getting an A+ on SSL Labs Report
Comments »